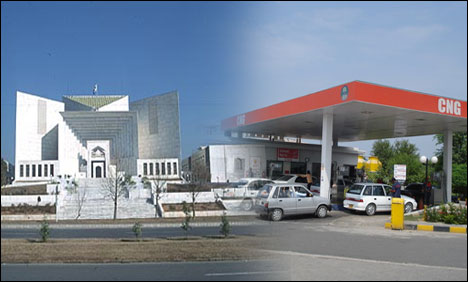 During Thursday’s hearing of the case the Supreme Court of Pakistan declared the profit rate and operating costs on CNG as illegal. The court declared that the profit of Rs 10 per kilogram on the price CNG and the linkage of CNG price with that of petrol were illegal.

Two judges were hearing the case and gave order to cut Rs 30.89 on CNG per kg price which was a unconstitutional and Ferrule crime on the customers Soon OGRA declared to bring back CNG price to the July 1 level position

Petroleum and Natural Resources Secretary Waqar Masood told the court that the weekly pricing mechanism for petroleum products had been suspended until the Economic Coordination Committee (ECC) of the cabinet had given its decision.id According to the OGRA report, the government’s procurement cost of CNG in Region 1 was Rs 19 per kilogram because the per kilogram price of CNG in Region 2 was Rs 17.57 and that the government decided on the price after including development surcharges. After ending the hearing CJP ordered to investigate why government put those Indirect taxes on CNG customers.

Later on Friday Federal Board of Revenue (FBR) said after dwindle the price of CNG  FBR have 10 Billion per month which means indirect taxes increase soon on daily uses items or Government have other options too . One option we all experienced in July 2009 when just like that order SC CJP passed the verdict to low the Petroleum prices then President Of Pakistan Issue some Presidential ordinance to reinstate the price of Petroleum and no one challenge it in SC (thanks to Our constitution)  same case will preferably predict in CNG Issue